Bristol Chamber Orchestra has had the privilege of performing with many guest soloists.  If you are a soloist and would like to be considered for future concerts please do contact us.  The orchestra has a history of showcasing both new talent and seasoned professionals. 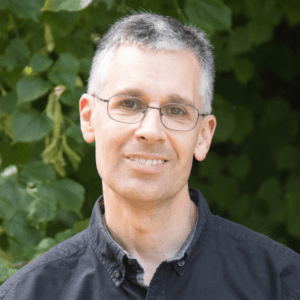 Rustom Battiwalla born in London, began playing the piano around the age of five. Later he also took up the double bass, and was for several years a member of the London Schools Symphony Orchestra. After leaving school Rustom went to the Guildhall School of Music to study piano, jazz piano and double bass. He emerged with a First Class graduation as well an Associate Diploma with honours from the Royal College of Music. At this time Rustom made the decision to remain an amateur musician, and since then he has given frequent solo, duet and chamber music recitals around the country.  Rustom lives in Bristol with his wife and daughter, and when he is not playing the piano, fulfils his childhood ambition by working as a train driver. 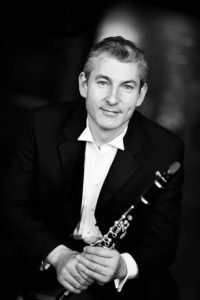 Nicholas Shipman began to play the clarinet aged 14. Initially self-taught, he made rapid progress and at age 15 was spotted by a clarinettist in the Hallé Orchestra who advised him to join an intensive specialist training course for gifted young musicians at Leicestershire School of Music, where he received inspirational lessons from eminent clarinettists including Jack Brymer OBE. At 17 he won a place at the Guildhall School of Music, where his teachers included Dame Thea King, and where in due course he gained his BMus (Hons). He then spent two years at the Royal Conservatoire in The Hague (Netherlands). Back in London in 1999, he began to build his career as a professional soloist and chamber musician. Winning the Croydon Symphony Orchestra Soloist Award (1999) resulted in numerous performances with that orchestra and thence to concerts and recitals in London (Wigmore Hall debut in 2005) and throughout the UK, France, Belgium and the Netherlands. He continues to appear with many orchestras and chamber groups, performing music by a wide range of composers both classical and contemporary. Local venues where he has played include the Guildhall, Bath, and St George’s Bristol. 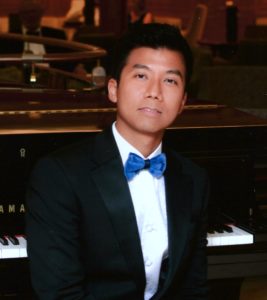 Jason Anderson is a freelance pianist and composer based in London. Originally from the Philippines, he moved to England aged 4 and studied at the Yamaha School of Music, later moving on to the Purcell School and the Royal College of Music. He completed a master’s degree in composition and piano and a Junior Fellowship at the Guildhall School of Music and Drama, where he was a finalist for the Ivan Sutton Piano Prize and won a coveted prize for composition. He has given professional solo and duo recitals in London and recently made recordings for BBC Radio 3. As a composer he has already received professional performances of two of his works. 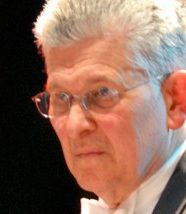 Dennis was conductor of Bristol Chamber Orchestra between 2014 and 2018. He began conducting the orchestra after 20 years in North America where he was music director and conductor of the orchestras of Saskatoon (1993-97), Shreveport (1996-2003) and North Dakota’s Minot Symphony Orchestra (2002-2012). He has also conducted in the USA, Europe and Australia including guest appearances conducting the Toronto Symphony and the Victoria Symphony.
Prior to this he was founder leader of the Alberni String Quartet, co-leader of the London Philharmonic Orchestra and leader of the BBC Philharmonic Orchestra. He has performed as solo violinist in three continents and has given over 20 solo broadcasts for the BBC. 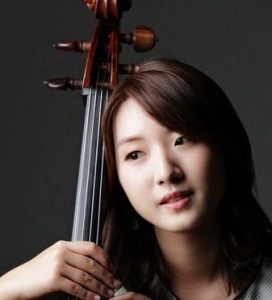 Sooyeon began by learning the piano at the age of four, changing to the cello two years later. She received her education and training in Korea and Japan.
While completing her Bachelor of Music at Yonsei University under Sung-Won Yang, she attended master-classes given by Professor Jo Cole, who encouraged her to study with her at the Royal Academy of Music, London. There she achieved Distinction in her Master of Arts in Cello Performance and was awarded the Dip.RAM for outstanding performance in her Final Recital in 2016.
She has been winning prizes since her early teens in numerous prestigious competitions, mainly in the Far East. She was awarded a Leverhulme Trust postgraduate scholarship for 2015/16, and she was the winner of the May Mukle/Douglas Cameron Cello Sonata Prize in the UK. 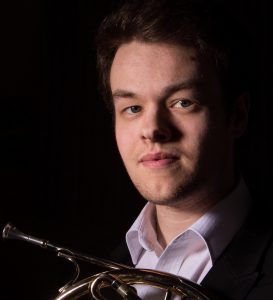 Timothy is a postgraduate horn player at the Royal Academy of Music, having previously been a first study pianist, also at the Academy, studying with Carole Presland.

He currently studies horn with Michael Thompson, Richard Watkins, Martin Owen, and Roger Montgomery, and has worked at the Academy with conductors such as Semyon Bychkov, Oliver Knussen, Yan Pascal Tortelier, and Robin Ticciati. He won the Dennis Brain Horn Prize (2013), for his performance 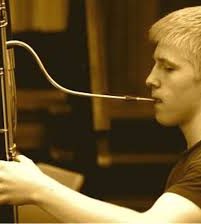 Matthew Petrie has been passionate about the bassoon from an early age. Having taken lessons on the instrument with Katherine Soulsby, he won the Classic FM Young Musician of the Year Award and later received a scholarship to become an Aldeburgh Young Musician. He went on to study at the Royal Welsh College of Music and Drama (RWCMD) under the tutelage of Meyrick Alexander (Head of Woodwind & former principal bassoon of the Philharmonia Orchestra), Martin Bowen (BBC NOW), David Buckland (BBC NOW), Steve Marsden (WNO) and Chris Vale (WNO). 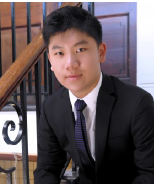 Bo was born in 1995, began playing piano at the age of seven and won second prize in the Xinghaibei competition when he was nine. He graduated from the middle school affiliated to Shenyang Conservatory of Music under the leadership of Danwen Wei, the last pianist who studied with Horowitz. In China he gave three successful recitals, performed at several prestigious musical events, and more recently won first prize in the Atlas national piano competition.

Bo now studies piano with Joanna MacGregor and chamber music with Michael Dussek at the Royal Academy of Music in London. He was awarded a full scholarship in his BMus programme in September 2014.

Júlia Pusker was described recently in The Times as a violinist of “eye-popping virtuosity” at the gala evening celebrating the Royal Academy of Music’s 190th anniversary.
Born into a family of musicians in 1991 in Kesckemét, Hungary, she began learning the violin at the age of 5. In 2005 she entered the Preparatory Department of the Budapest Academy of Music, studying under Katalin Kokas and then with István Kertész, and in 2011 moved to London to continue her studies at the Royal Academy of Music with György Pauk.
She has won numerous prizes in major competitions, and performed as a soloist with several top orchestras in her native Hungary. In 2010 she was featured in a TV documentary called “Invisible Strings—the talented Pusker sisters”, which received wide international coverage.
Last year she made a CD recording of the chamber version of Bruckner’s 2nd symphony with Trevor Pinnock and the Royal Academy soloists ensemble. Her violin, a G.Gagliano (crafted in 1791), is loaned to her by the Royal Academy. 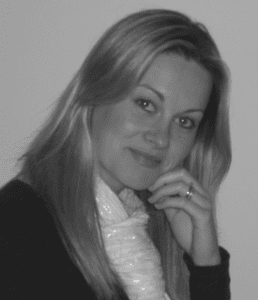 Stephanie Spragg, soprano, graduated from the University of Wolverhampton Faculty of Music with a Masters degree. She has sung with the Wolverhampton University Chamber Choir, the University Early Music Consort, the City of Birmingham Symphony Chorus and as a member of the award-winning “a cappella” quartet “The Nightingales”. Before attending university she gave solo performances as a visiting Head Chorister at York Minster and the cathedrals of Winchester, Salisbury, Bristol and Norwich.

Now living in Bristol, Stephanie gained her post-graduate Certificate of Education at Bristol University. She continues to study voice with Margaret Thomas and sings with the Bristol Choral Society both as chorus member and occasional soloist. 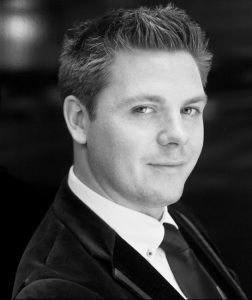 Jonathan Wiseman became Oxfordshire Young Soloist aged fourteen and since then studied at the Royal Academy of Music, London under the tutelage of Michael Lewin, Head of Guitar. In 2010 he was a participant in the RoyalAcademy’s Patrons Award his playing featuring in the BBC documentary, ‘How to be a Composer’. One year later Jonathan joined the elite rank of guitarists who have won the Julian Bream Prize, an award for artistic excellence that is adjudicated by the legendary Maestro himself. In 2012 the Academy conferred Jonathan with their highest performance award, an honour reserved for work of exceptional maturity, outstanding in both artistic and technical delivery; additionally, he was a Prize-winner at the International Ivor Mairants Guitar Competition.
Since graduating with Distinction, Jonathan is in increasing demand as a Concert Artist and Masterclass instructor. He is committed to broadening the perception of the instrument and has created an independent publishing and recording label. Jonathan is also keen to instigate new commissions for the Guitar, collaborating with Jason Noghani and Jonathan Cole at the Royal College of Music where he was recently invited to provide a lecture and workshop on ’Composing for the Guitar’. Jonathan plays guitars by Francisco Santiago Marin and Greg Smallman and sons.

Alison Bell
“Molly on the Shore” – Grainger (June 2018)
Exsultate Jubilate   – Mozart (June 2018)
Alison began studying singing whilst a student at Cambridge University and subsequently won a scholarship to the Royal Academy of Music, where she studied with Yvonne Minton. Her repertoire as an oratorio soloist includes St Matthew Passion, A Child of Our Time, Messiah, Verdi’s Requiem, Duruflé’s Requiem and Elgar’s The Music Makers and The Dream of Gerontius. She has appeared as soloist at Malvern Festival, Edinburgh Festival, at the Paris Festival D’Automne, Salzburg Festival and with the Danish Symphony Orchestra in Copenhagen. Her many roles in opera and operetta include Dido (Dido and Aeneas), Suzuki (Madama Butterfly), Buttercup in HMS Pinafore and Katisha in The Mikado, for which she received critical acclaim in the national press. Since moving to the South West, she has given recitals in and around Bristol and appeared as soloist in Elgar’s Sea Pictures with Frome Symphony Orchestra and with the West Mendip Orchestra, Messiah with Bristol Millennium Orchestra, Mozart’s Requiem in the Lord Mayor’s Chapel, Bristol, Bach’s Magnificat with Portishead Choral Society and with Bristol Cabot Choir, Haydn’s Paukenmesse, Rossini’s Petite Messe Solennelle and Messiah with Fairford Choral Society.