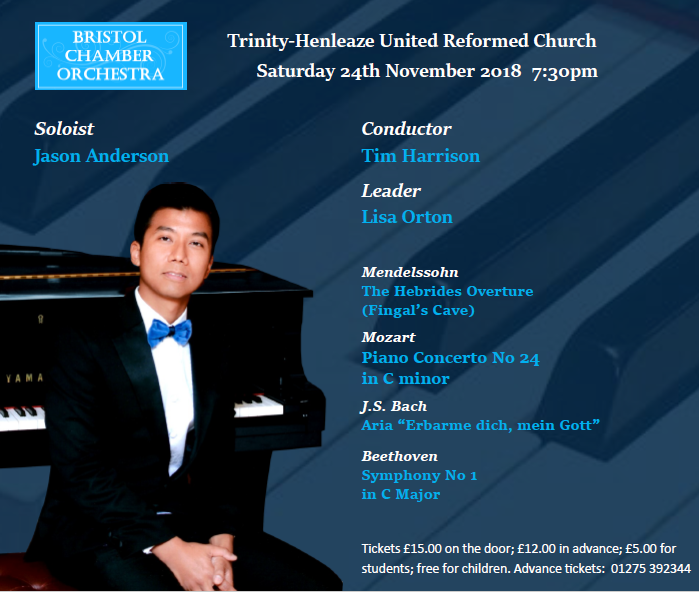 Soloist: Jason Anderson
Conductor: Tim Harrison
Leader: Lisa Orton
Mendelssohn        The Hebrides Overture (Fingal’s Cave)
Mozart                     Piano Concerto No 24 in C minor
J.S. Bach                 Aria ‘Erbarme dich, mein Gott’
Beethoven              Symphony No 1 in C Major
Our soloist Jason Anderson works as a freelance pianist and composer based in London. Originally from the Philippines, he moved to England aged 4 and shortly afterwards began his music studies at the Yamaha Music School, later moving on to the Purcell School of Music and the Royal College of Music Junior and Senior Departments. Jason completed a master’s degree in composition and piano and a Junior Fellowship at the Guildhall School of Music and Drama. While at the Guildhall Jason was a finalist for the Ivan Sutton Piano Prize, and was awarded the Tracy Chadwell Memorial Prize for composition. He has performed numerous solo and duo recitals in London including at the Purcell Room and the Cadogan Hall, and more recently recorded for BBC Radio 3 as well as performing at the Luxembourg Music Festival. He has also had the privilege of performing for HRH the Prince of Wales and former President Ramos of the Philippines. Composition highlights include winning the BBC Guardian Proms Young Composer 2004 competition; his ‘Sirenenes’ for two sopranos and chamber ensemble was performed at the Wigmore Hall, and ‘Circles’ was broadcast on BBC Radio 3 Late Junction by the BBC Symphony Orchestra. Jason’s wife and duo partner is clarinettist Emily Heathcote.
Tickets £15.00 on the door; £12.00 in advance; £5.00 for students and free for children. Advance tickets available from orchestra members or by calling 01275 392344.
Download Flyer
+ Google Calendar+ Add to iCalendar